It’s a small Eco tourism destination 5 Km from marayoor town on the ...

Rajiv Gandhi children's park at Marayur is spread across a hectare und...

Marayoor, located forty km from Munnar, is a rain shadow village lying in the eastern side of the Western Ghats and is bordered by the neighbouring state Tamil Nadu. Marayoor is the only place in Kerala with a natural growth of sandalwood trees. A reduced rainfall is most suited for the the sandalwood factory run byMarayoor-Kerala-India the Forest Department is of tourist interest. Although compared to the neighbouring states like Tamilnadu and Karnataka, Kerala has less acres of sandalwood forests, the same being confined to Marayoor and a few forest areas in Wayanad hills, the state possesses the best types of sandalwood trees owing to a reduced rainfall which favours its abundant growth. Marayoor as a pristine, heavenly and unexplored tourist spot is comparable to Munnar which is one of the most sought after hill stations in India in every respect. The place is especially an excellent trekking spot for adventure seekers. The road from Rajamala to Marayoor is flanked by lush green tea estates. As yMarayoor-Kerala-Indiaou drive by, there are occasional waterfalls. Then you come across the sandalwood forest. First, the trees appear one by one, and soon these turn into a sea. The air is cool and one comes under the rain shadow area. Marayoor houses the ‘muniyaras’ or the stone coffins with underground tunnels, which date back to the Neolithic period. These cave-like structures resting on vertical rocks are present everywhere - they are stone slabs resembling crudely-made boxes. There are paintings depicting the legendary wanderings of ‘Rama and Sita' and the 'Pandavas' inside the caves. Descending the hill, one can see the cane crop in the valley below dancing in the wind. A park named Rajiv Gandhi National Park is an ideal picnic spot nearbyMarayoor-Kerala-India. A children's park formed under the canopy of a single Banyan tree spreads across a hectare of land and is a wonderful sight. Then there is the Thoovanam Waterfalls where one can spend endless hours romancing with nature. Marayoor is inhabited by a group of tribals who are primarily engaged in agriculture. The temperature in summer goes up to 30 degree Celsius while the winter temperature can come down to as low as 8 degree Celsius. It is one of the main towns in the district of Idukki. This place can also be accessed from Pollachi / Palani in Tamilnadu and from Munnar. Tourists can find a good number of accommodation facilities as well as shopping facilities at Marayur and in Munnar. 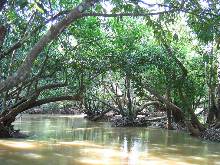 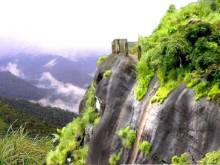 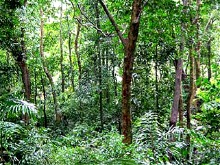 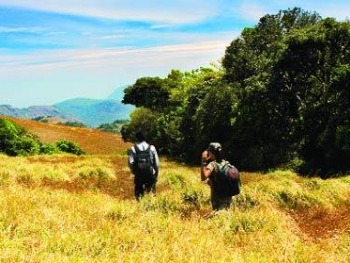